HomeBlogWhat is a Himalayan salt lamp? 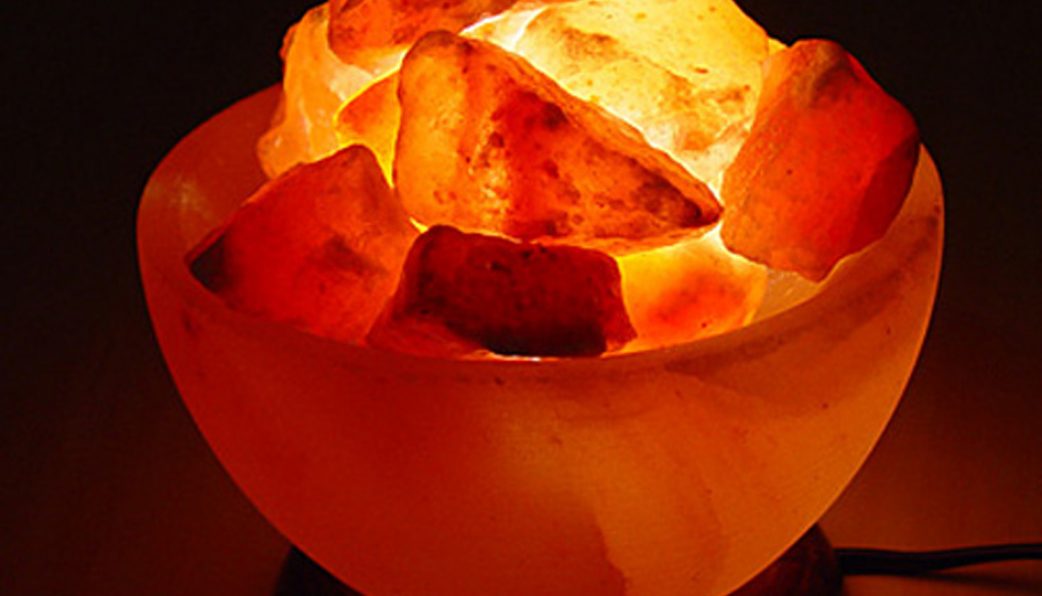 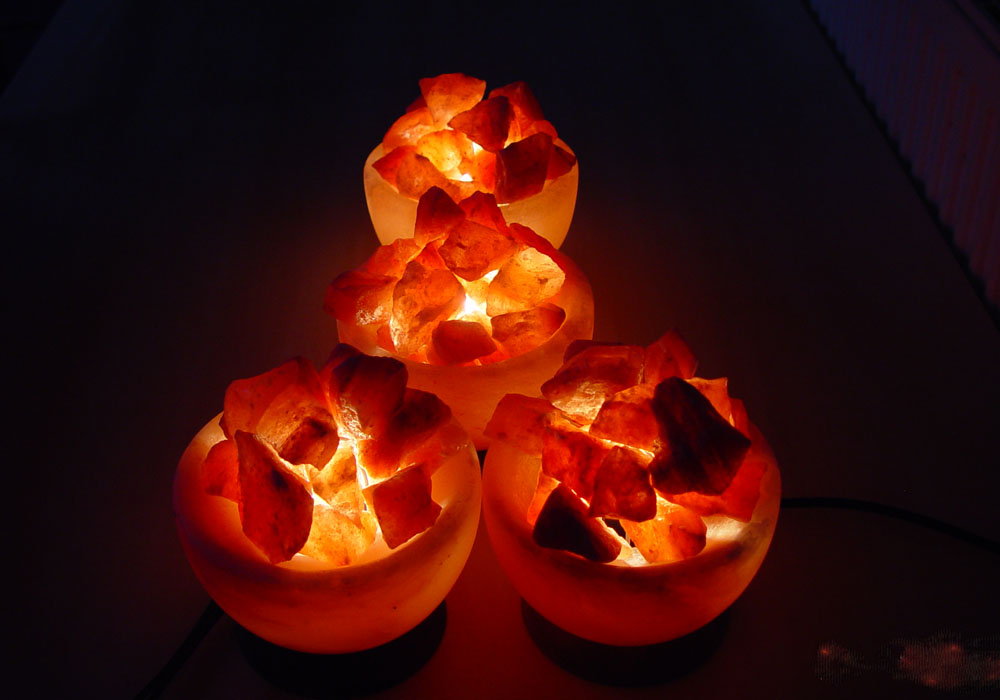 While they make attractive pieces for any room in your home, these illuminative devices are more than just decorative night lights. Himalayan salt lamps are helpful in filtering impurities from the air, among many other things. Here’s everything you need to know about them.

What is a Himalayan salt lamp?

Himalayan salt lamps are made from pink salt crystals mined from the edge of the Himalayan Mountains—the only place where you can acquire authentic Himalayan pink salt. However, the lamps themselves range in colour from light pink to pink with an orange hue, depending on the mineral concentration. The pink Himalayan salt crystals are mined, then hollowed out and fitted with a bulb to provide both light and heat. Himalayan salt rock lamps also come in baskets of crystal salt blocks with a light underneath .

People use these salt crystal lamps for a number of different reasons; Their soothing, pink glow can stimulate deep relaxation. They make an attractive and organic-feeling addition to home décor, creating a more balanced and mindful space. For these purposes alone salt lamps make a welcome addition to almost any home.

How does a Himalayan salt lamp work?

Salt is hygroscopic, which is a scientific word meaning that salt attracts water molecules from the surrounding environment.

A large block of salt, like a pink Himalayan salt rock crystal, works by attracting the water molecules in your room. In so doing, it also pulls in all the pollutants and contaminants attached to these molecules. The salt rock lamp helps to detoxify your room by capturing and holding these particles so they aren’t left floating around for you to breathe in. Then, as the bulb heats the lamp, the water vapour is released back into the air, but the rock salt lamp retains the contaminants.

Along with the hygroscopic benefits, Himalayan natural salt lamps are also said to release negative ions into the surrounding environment. For those curious, negative ions are simply oxygen atoms with an extra electron.

These negative ions occur in nature via the effects of water, air, and sunlight. Have you ever gone for a hike through the mountains or near a waterfall only to feel rejuvenated? Negative ions are partly to thank for that wonderful feeling. Nature has the ability to heal, and proponents of Himalayan salt lamps argue these pink salt rocks can mimic, to an extent, the feeling you get from being outside.

All naturally occurring minerals contain trace amounts of heavy metals. These heavy metals, like lead, are found in the air, soil, and food. Only when lead concentrations reach high levels do they start to pose a threat to your health.

Because these metals can exist on salt particles, many worry salt lamps could pose a threat. While true that pink salt can contain these heavy metals, they do not contain enough to pose a health risk. Especially because they aren’t being ingested. So unless you plan on licking your Himalayan salt crystal lamp every day, you’ll be fine.

However, what does not pose a threat to humans can be harmful to your pets. Too much salt can be toxic to many kinds of animals, like cats and dogs, so it would be wise to keep Himalayan salt lamps out of the reach of any household pets who may want to sneak behind your back and have a taste when you aren’t looking.

What to look for in a salt lamp.

As mentioned earlier, there are many different types of salt lamps that range in colour to style. Among the most common are lamps created by inserting a light source directly into a salt crystal or a basket of crystals with a light source underneath. In these cases, the differences are for the most part purely aesthetic, and your choice comes down to finding the right solution for your tastes and complementing the environment in your home.

That being said, one thing you will have to keep in mind is making sure you avoid purchasing afake Himalayan salt crystal lamp. Most salt lamps emit a soft, warm glow. Be cautious of lamps that give off too much light. Also, some crystal lamps are white. Himalayan white crystals do exist but are rare and expensive. So if you find a white crystal lamp and a low price, be cautious. Lastly, make sure the crystal was mined from Kewra, Pakistan, or elsewhere along the Himalayas—the only place where true Himalayan Salt is found.

Collecting air contaminants and releasing negative ions in the home can have powerful healing properties and health benefits. Here is a short list of just some of the possible benefits of having a Himalayan pink salt lamp in your home:

Proponents of Himalayan salt lamps boast that these salt rocks have the ability to remove pollen, dust, smoke, and many other types of contaminants.

Salt has become a common mineral to naturally heal and strengthen the body and mind. Having salt lamps in the home will help give you a purer atmosphere that is conducive to healthy living and improving your overall well-being.

In fact, people are so convinced these pink salts are useful that there are Himalayan salt inhalers available on the market.

Another bold claim regarding Himalayan salt rock crystal lamps is their ability to help re-energize and revitalize the body.

It has been said that positive ions can drain your body of energy while negative ions help rejuvenate the body and mind. Once negative ions reach the bloodstream, they are said to produce biochemical reactions that increase serotonin, a chemical that helps to alleviate depression, relieve stress, and boost daytime energy.

Negative ions have also been shown to help in the treatment of seasonal depression. A study conducted by Columbia University found that when participants suffering from seasonal affective disorder were exposed to negative ions, 58 percent of them reported feeling better and a loss of their usual symptoms.

Not only do positive ions drain energy levels, they can also stop you from replenishing them because of lost sleep. Positively charged particles can reduce the supply of blood and oxygen to the brain, which can lead to irregular sleep patterns.

Along with helping to rejuvenate energy and mood, natural negative ions in the air can reverse sleep deprivation problems.

Just plug in your salt lamp throughout the day, or have it running at night while you sleep, and the room will transform into a haven of restfulness and help rejuvenate your body as you sleep soundly through the night.

Like it or not, we live in an electrical word. And while the many devices and tools we use each day can help simplify our lives, they also leave behind electromagnetic radiation. Everything from your smartphone to your television can leave traces of this radiation. Think of it as electrosmog in your home.

Himalayan salt lamps act as an air ionizer, spreading negative ions that can help counteract and neutralize this radiation. In combination with spending time in nature, using a Himalayan pink salt rock lamp could help balance positive and negative ions.

Some skin conditions, like eczema, are adversely affected by the pollen count and dust levels in the home.

While purifying the air won’t single-handedly solve skin problems, it will certainly help eliminate some of the causes. When used in conjunction with other treatments, air purification can reduce symptoms.

Static electricity in your home is more than just an annoyance. Some people have claimed to suffer loss of sleep and dry eye irritation as a result of excessive exposure to static electricity.

Owning a Himalayan rock salt lamp could be the perfect addition to creating a more mindful space and helping you live a more comfortable, natural lifestyle. Not only do these pink salt lamps provide a soothing, therapeutic glow to any room in which they’re placed, but they can help detoxify your environment by removing negative contaminants and leaving you with a more natural living space.

Not only can these pink salt lamps help detoxify your environment by removing negative contaminants and replacing them with helping negative ions, but owning a Himalayan rock salt lamp could be the perfect addition to creating a more mindful space and helping you live a more comfortable, natural lifestyle.

Pink Himalayan salt rock lamps provide a soothing, therapeutic glow to any room in which they’re placed. They could be used as an integral part of an altar or simply tasteful design elements to improve any mystical and meditative space in your home. Whether you’re looking to improve the atmosphere in your home office or create a space that inspires the life you want to live, a Himalayan salt lamp could be the perfect solution.